The invention of filter coffee in 1800 by the Archbishop of Paris, Jean-Baptiste de Belloy, proved to be a great step towards improved coffee in the cup, especially for its purity. Water is poured into a finely perforated compartment and filled with ground coffee set above a flask: the assembly is designated coffee maker. The method is called percolation. This method was favoured by Brillat-Savarin. He refers to it in his influential book published in 1826, entitled The physiology of taste: "It was just a few years ago that much thought was focused on the best way of making coffee; which originated almost without a shadow of doubt from the fact that the head of government drank a lot of it. Ideas were put forward on ways to make coffee without burning it, without reducing it to powder, by boiling it for 45 minutes, by putting it in an autoclave, and so on. Over time I have tried all those methods and any others proposed to this day and I have concentrated my efforts quite knowingly on methods under the heading of Dubelloy which consists of pouring boiling water on coffee put in a china or silver receptacle perforated with tiny holes. You take this initial decoction and heat it to boiling point, you then put it through once again and the resulting coffee is as clear and as tasty as possible." At that time, paper filters were not mentioned. It was German woman, Melitta Bentz, who invented them early in the 20th century and completely transformed the preparation of coffee; This is the method most used even today.

To make a really nice filtered coffee, forget cheap coffee makers that often deliver water that is too hot with a central drop by drop system which over-extracts the coffee in the centre and under-extracts it on the sides. Try to favour manual filtration of the V60 Hario type which enables control of all the filtration parameters. A default systems is the sprayhead filter coffee maker, such as the Moccamaster or San Marco. ensuring more uniform infusion and regulated water temperature. The filter method enables one of the purest yields in the cup and even if it is relatively porous it is able to recover the finest and most volatile floral type aromas.

A clear liquid, similar to tea, a light mouthfeel, acidulous depending on the coffee being used with successful recovery of any type of aroma.

• The strengths are in the profile. There are hardly any weaknesses in this method except in the opinion of fans of over-concentration (espresso).

• Not so easy to succeed. Difficult to obtain the same result twice over but when it succeeds so gratifying.

• 12 g of coffee Perform a pre-infusion by putting in 24 g of water and leave to infuse for 30 seconds.

• Pour in water several times (30 to 40 g each time) in a circular movement from the centre to the edge and back again to the centre.

• Extraction takes between 3 and 4 minutes

Dicover our tutorial of the V60 recipe : 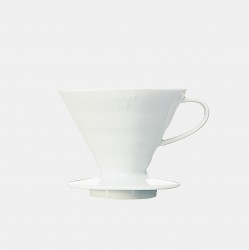 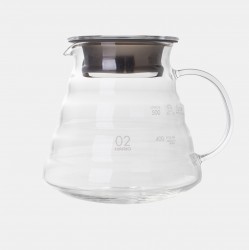